Biography
Before a nation can become real, it must first be imagined. It seems appropriate that Super Mama Djombo, the band that became a primary expression of Guinea-Bissau's identity after independence, was born in the fertile imagination of children.
It started at a boy scout camp. Four young friends (the youngest was only six) named Zé Manel, Herculano, Gonçalo and Taborda came together to play and got their first taste of success. Soon they were playing weddings, baptisms and birthday parties around Bissau. Not long after, they voted in a lead guitarist and vocalist Medina. Then came Chico Karuca, first as a singer, later displacing Taborda on bass. This young band was serious, and voted out any members who they thought weren't keeping pace with the group as they became more skilled. Members came and went, though the core group remained the same.

Ever improving their act, the boys decided that they needed a new name. Their original name was long and in Portuguese; they wanted something more beautiful, powerful, and home-grown. The lead singer suggested Mama Djombo, the name of a sovereign and deeply respected female spirit. The group liked it, and from then on they were known as Super Mama Djombo.

It was the perfect choice. Though the group was too young and politically unaware to know it at the time, they were growing up amidst revolution. The revolutionary Party for the Independence of Guinea-Bissau and Cape Verde (P.A.I.G.C.) had been engaged in rural mobilization and clandestine urban agitation since 1959. Hidden under the dense forest canopy in the south of the country, guerillas and villagers struggled to set up a revolutionary society. Mama Djombo was the spirit most appealed to for the protection of these independence fighters. 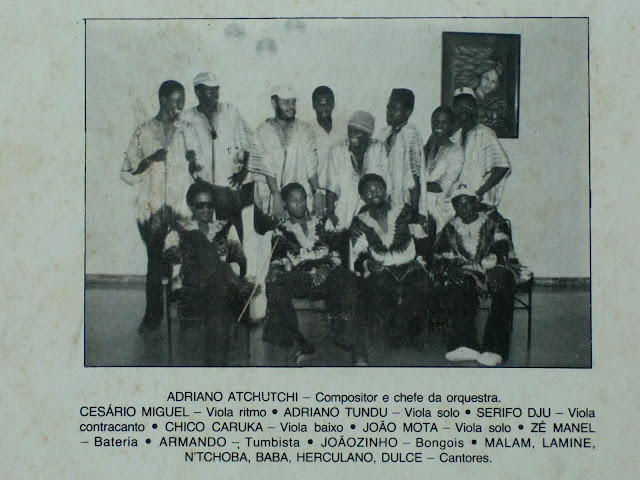 The band grew, and grew up. After Cobiana jazz, the premier band of political resistance emerged in 1970 to mobilize and sensitize an enthousiastic public. The young Super Mama Djombo would play at their shows during intermission. Cobiana, interestingly, is the sacred place of residence of the female spirit Mama Djombo. While at the time Cobiana jazz was more politically committed, both groups had a similar, subversive project: To sing in Kriol and interpret indigenous rhythms in the public space. The colonial administration had all but forbidden both practices.
Independence was won in 1974, and that year brought the final formative elements to the band: freedom, euphoria, and bandleader Atchutchi (Adriano Gomes Ferreira). Atchutchi was a skillful bandleader and composer with a book full of songs waiting to be performed. medina was voted out in favor of Atchutchi and went to form Capa negra, another of the stellar bands from this exciting time.
Atchutchi had been mobilized and politically aware for longer than the other members, and his contribution completed the project. The band would become politically charged. It would imagine a new, unified national identity that was neither Portuguese nor divided by indigenous ethnicity. It would help re-invent Kriol, the synthesis of Portuguese and African languages spoken in the cities, that the revolution had transformed into a common language of national unity. 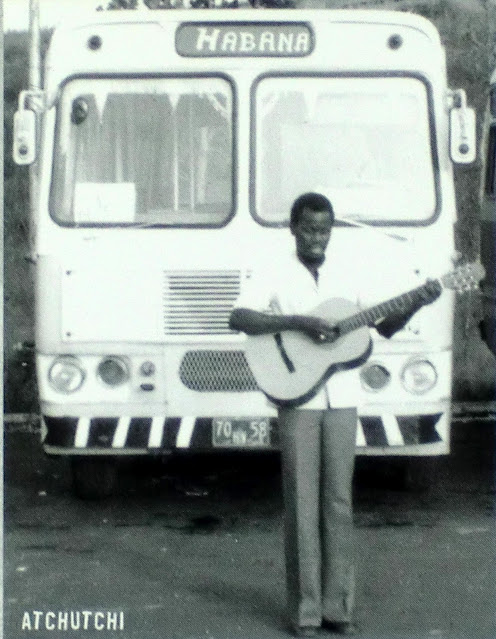 After Atchutchi's arrival, they added among others the fantastic lead guitarists Joã Mota and Tundu, rhythm guitarist Miguelinho; vocalists malam, Dulece and N'Tchoba; and percussionists Armando and Joãozinho. it truly became The Orchestra Super Mama Djomba.
The success of the new orchestra was almost immediate. They toured Guinea-Bissau and Cape Verde playing to ecstatic crowds. Their live concerts were broadcast religiously on the national radio. The band traveled regularly with first president Luís Cabral, representing the new national identity in Angola, Mozambique, Cape Verde, and Portugal. The orchestra traveled to Cuba, to mark Guinea-Bissau identity "present" at the 11th Youth Festival in Havana. They outshined the other groups from Africa, and appeared on Cuban national television. At home, the band continued to reflect the people back to themselves.

In early 1980, the group went for its only recording sessions at Valentim De carvalho Studios in Lisbon. in those sessions they recorded straight through over six housr of tape and were still far from exhausting their repetoire. This was a band that only played live for years in constant dialoque with their public and virtually all the members were composers. Five albums from these sessions made it to vinyl: 'Na Cambança' (SMD 001) and 'Festival' (SMD 002) came out in 1980 on the Cobiana recordlabel. The albums 'Sol maior para comandante'(SMD 003), 'Mandjuana' (SMD 004) and 'À memória de N'Famara Mané'(SMD 005), were released in 1983 by the Sovjet record label Melodia from Leningrad (now St. Petersburg).
The first album to be released was 'Na Cambança'. By the time it appears, people at home in Guinea-Bissau already knew the songs by heart, but thisr release on LP extended the reach of the band and opened new opportunities-particularly the track "Pamparida." Adapted from a children's play song, this infectious track made the band a West African sensation. DJs would often make sure they had two copies of the album, so they could play the song over and over without stopping. It is said that when "Pamparida" came on the radio during lunch, people would get up and dance the song, then return to their meal. It was "Pamparida" that filled a stadium in Senegal to capacity, where a then-unknown Youssou N'Dour opened for the orchestra. When the music started, the crowds outside literally broke down the doors to hear them play.

Video: Pamparido (live in 2010)
It seemed like an ascendancy that would never end-and it certainly could have continued. The offers poured in: an African tour, more European tours, album deals. But these offers brought new pressures. This was a revolutionary band committed to imagining and building the nation through song. Atchutchi was opposed to the deals, and at the time most of the band agreed with him. Who was going to tell President Cabral that the national, revolutionary band was now run by capitalists from the Gambia, Senegal, France, or (of all places) Portugal? Nobody had the heart.
Audio: Sol maior para commandante
﻿
In November 1980 Cabral was deposed, and political repression intensified. Even before the coup, the band's music had begun to point out corruption and power struggles emerging in the government. Significant tracks in that vein on this collection include "Ordem do dia" and "Suur di no pubis." The new regime wasn't interested in supporting art-particularly art that was critical of the state-like the Cabral government had, and opportunities at home began to dry up. That was the beginning of the end. Zé manel was the first to go. In 1982 he released a scathingly critical solo album and under the new regime his friends and family became concerned for his safety. The next year he left to study at a Portuguese conservatory. The band became devided. many members decided to fare on without the leadership of Atchutchi, but something was missing. By 1986 the Orchestra Super Mama Djombo  was done.

The name resurfaced in 1992, when Atchutchi recorded the soundtrack of the Flora Gomes film 'The blue eyes of Yonta'. The songs were early Mama Djombo compositions, but at that time only a few of the original members were in the revived band. For many years the music of Super Mama Djombo remained very hard to find. Finally in 1999 the Teca Balafon record label celebrated the 25th anniversary of the birth of Super Mama Djombo with the CD release of the classic albums 'Na cambanca', 'Festival' and 'Sol maior para comandante'. Together with the release of these classic albums the band came with a new cd; 'Homenagem a José Carlos Schwarz', a tribute to the legendary poet and founder of Cobiana Jazz, who died at the age of 27 in a plane crash near Havana.
﻿
Video: trailer of Udju azul di Yonta

In 2003 Cobiana Records  released an outstanding compilation of the early Super Mama Djomba material. All these years the dream of reuniting the old Super Mama Djombo has persisited. Finally this dream came through in 2008, when five  members of the old band came reunited in a recording studio in Iceland, together with eight other Guinean musicians. The new album 'Ar puro' (Fresh air) contains eleven new songs. After the release of the album the band toured in Europe and Africa. 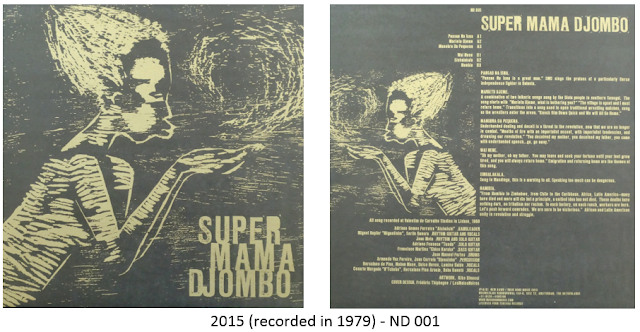 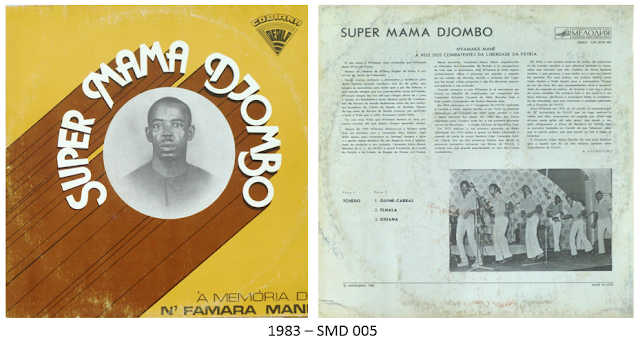 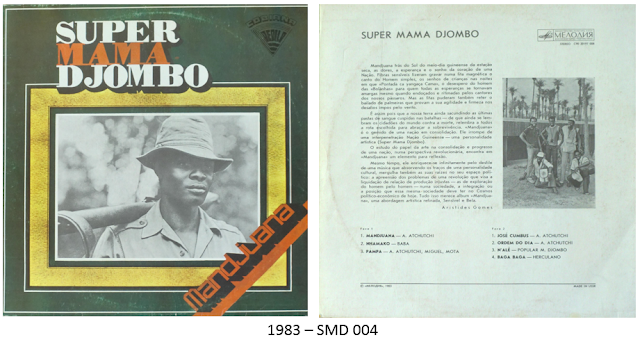 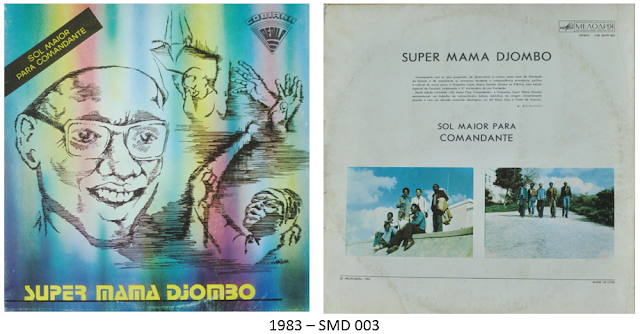 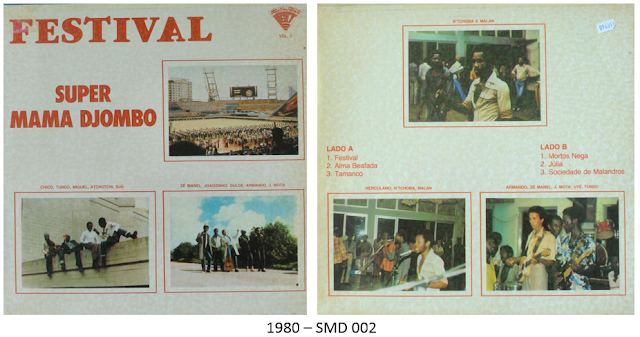 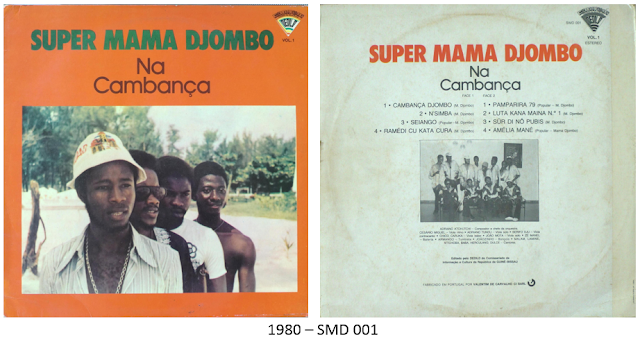