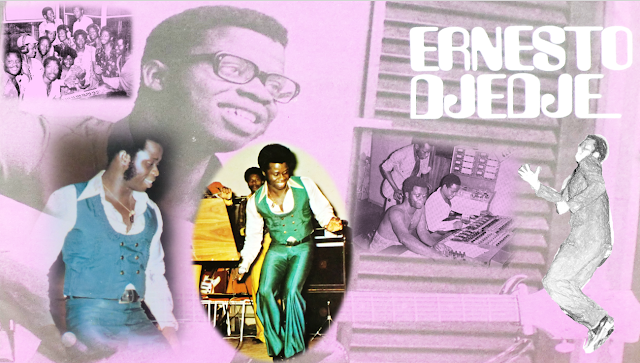 Ernest Djédjé Blé Loué was born in 1947 in Béte country Ivory Coast in the village Tahiraguhé near the town Daloa. Djédjé's father was a Senegalese Wolof man, but his mother came from the Bété people who surrounded him in his village Daloa.

Together with his friend Mamadou Kante, Ernesto Djédjé founded in 1963 his first band called 'The Antelopes'. The band gave concerts in Dalao and throughout the western Ivory Coast. In 1965 Amédée Pierre recognized the talent of Mamadou and Ernesto and recruited the two teenagers in his band 'Ivoiro Star', the leading Dopé band of the time. Mamadou became bass player and Ernesto guitarist. From 1965 to 1968 Ernesto  Djédjé was also the conductor of the Ivoiro Star Band.
Paris 1968 - 1973
In 1968 he decides to emigrate to Paris to study computer science. He became one of the few immigrants in France in the 1960's. In France he met several African music celebrities such as Manu Dibango, Anouma Brou Felix and Francis Lougah. With their cooperation, inculding that of Manu Dibango, he recorded his first record entitled Anowa in 1970. it was a 45prm single, strongly influenced by American Soul and Rhythm & Blues. Another 45rpm single, Gniah-Pagnou followed within a year. In 1971 he released two more 45rpm singles N'wawuile and Lourognon gbla with 'l'Orchestre Reeba'. After this four records, released on the Philips record label, he records two more 45rpm singles in 1973, Mahoro and Zokou gbeuly  on the Fiesta record label. Shortly after he decides to return to Ivory Coast.

A period of musical research 1973 - 1976
Back in Ivory Coast Ernest begins his efforts to modernize the Ivorian music. He wants to revolutionize the Ivorian music by mixing elemets of Western Disco, Funk, Cuban Rumba and Central African pop music like Makossa with traditional Ivorian music. When travelling to Nigeria, he discovers the Afrobeat of Fela Anikulapo Kuti, a mix of tradional Yoruba Rhythms, Funk, Jazz and Highlife. A musical style that sticks to his desires. Finally he feels capable to combine dance and disco Bété, with lyrical songs 'Tohourou', Rhythm & Blues and his own  locally-based guitar style.  In this period he released Aguisse, on the record label of Gbadamassi Raimi, aka Badmos. He calls the result of his experiments 'Ziglibithy', the music which soon will bring him fame in Ivory Coast and later throughout West Africa. 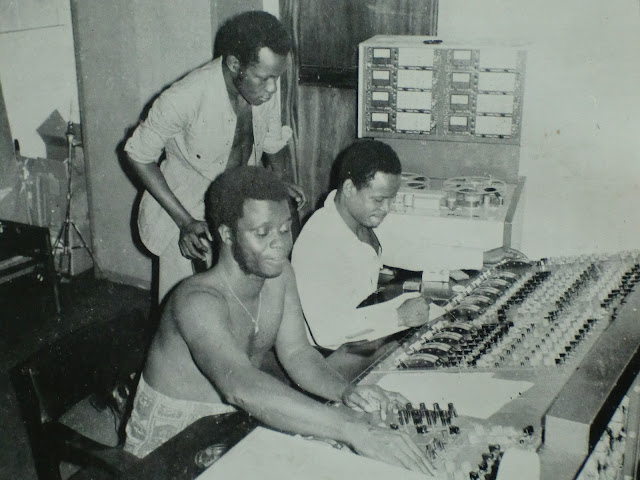 During 1977 he spent six months in Lagos, Nigeria to record his first LP Ziboté  in cooperation with Badmos, founder of Badmos Store and the Maikana record label. The album became an instant hit in Ivory Coast and the rest of West Africa. Djedjé was devoted 'best musician of the year'  and his band which consisted of Diabo Steck, Bamba Yang, Lén Sina, Eugène Gba, Yodé, Tagus, Assalé Best and Abu Yubla, became famous by their exciting stage performances. With his second LP Ziglibithiens, which came out in 1978, Djedjé reached the top of his fame. He is discribed as 'Gnoantré National', the man with whom a nation fight, because 'Gnoantré' means struggle/fight in the Béte language. Filosophy professor Yacouba Konaté said the following about Ernesto Djedjé and his Ziglibithy music: "Better than any theory of authenticity, better than any speech advocating a return to sources, Ziglibithy gives meaning and shape to the will of Africans who want to feed on the sap of their roots. It's an action, a recreation that a new aesthetic based on the cultural and historical base of Ivorian society". He becomes the icon of a generation in search of a new identity, modernizing culture of Western influence while tapping into Ivorian culture. 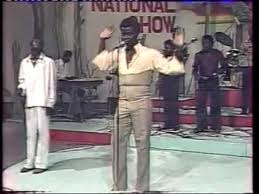 ♫ Clip live Ziboté
♫ Clip live Aguisse
♫ Clip live Ziglibithiens
♫ Audio Golozo
Ziglibithiens is followed by the albums Golozo (1979, Azonadé in (1980)  and Zouzoupalé (1981).  and Tizéré (1982). The artist finished his career with the album Tizeré including a song in tribute to the politician Konan Bedie in 1982 and another, dedicated to President Felix Houphouet-Boigny Houphouët-Boigny called Zeguehi. At that time Ernesto Djedje - close to the single ruling party, the PDCI-RDA - was the "darling" of President Felix Houphouet-Boigny and Bédié. No conference or reception of presidential importance was organized without a performance of "national Gnoantré". He was often invited to perform with the orchestra of the Ivorian Radio and Television. He then made the heyday of Radio Côte d'Ivoire, including after his sudden death in June 1983 in Yamoussoukro.

Ernesto Djedje died suddenly June 9, 1983 at the military hospital in Yamoussoukro at the age of 35 years. His death constituted a shock to the Ivorian nation. Officially, the artist died subsequent to poisoning after his return travel from Ouagadougou in Burkina Faso during a meal at Yamoussoukro. To date, no survey result is available. Several assumptions and rumors circulated about his death, rumors by the press obligingly ivoirienne On July 30, 1983 his body was displayed at the Stade de Tahiraguhé. His funeral will take several days with the delivery of several artists including  Alpha Blondy.
(Main resource: Wikipedia) 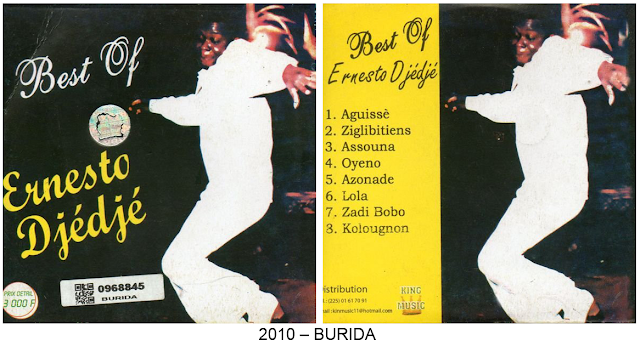 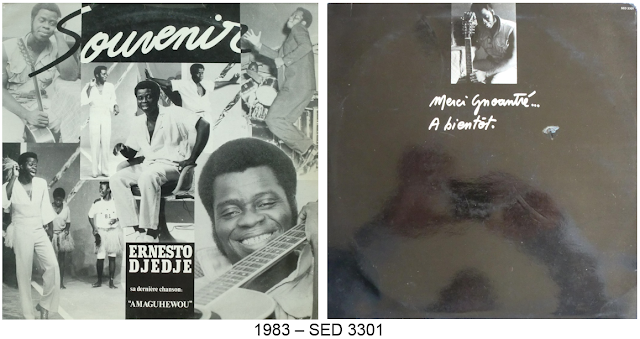 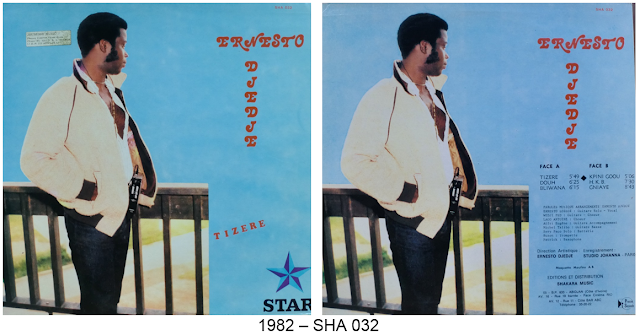 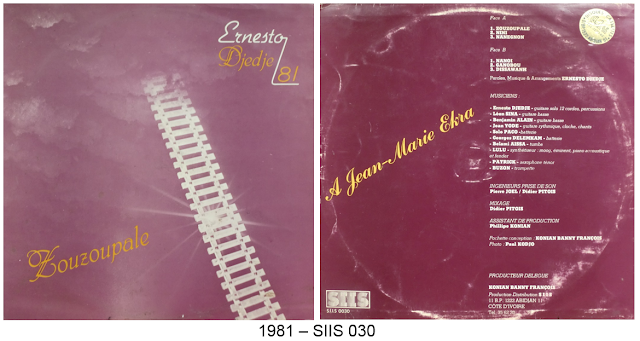 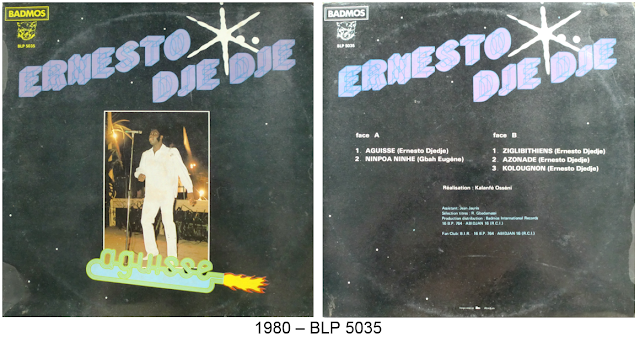 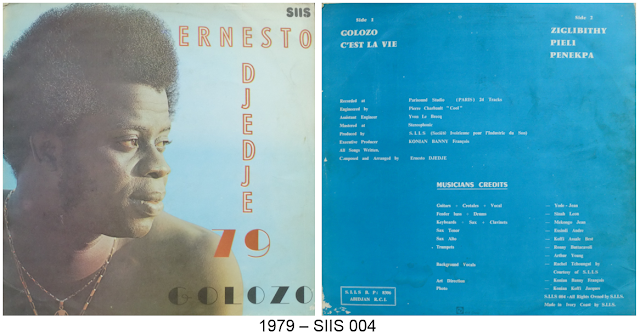 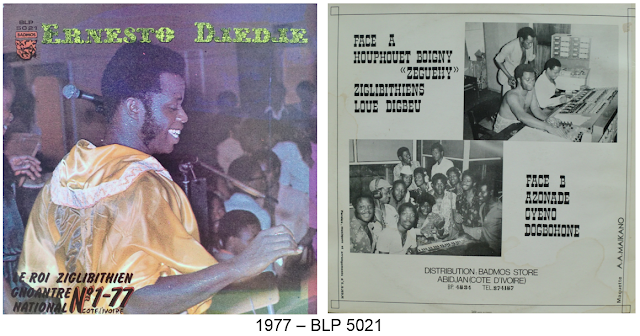 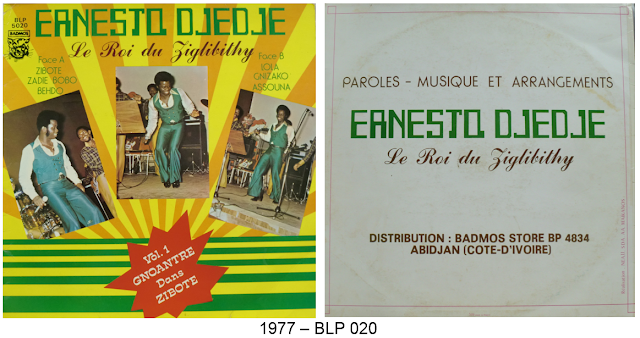 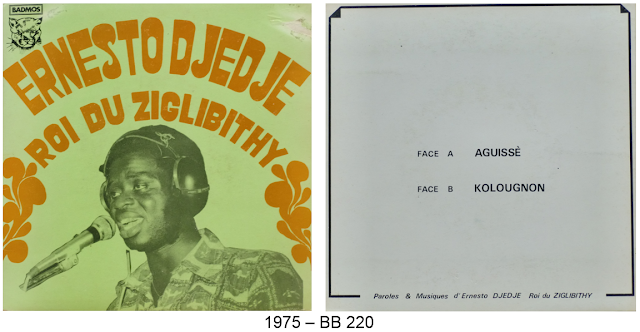 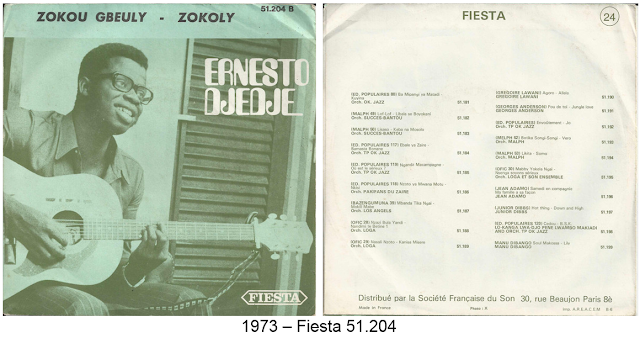 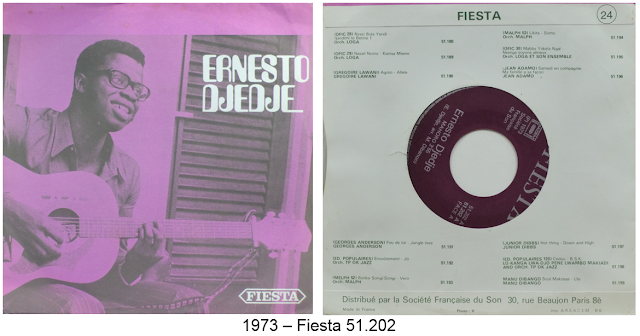 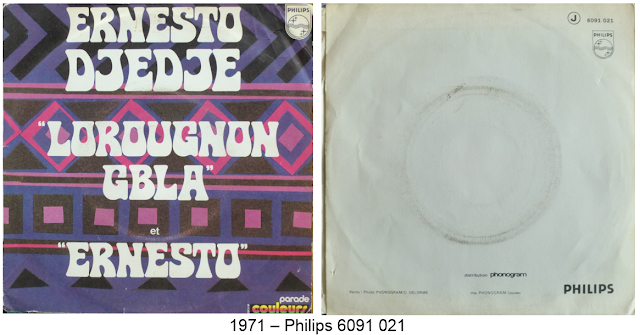 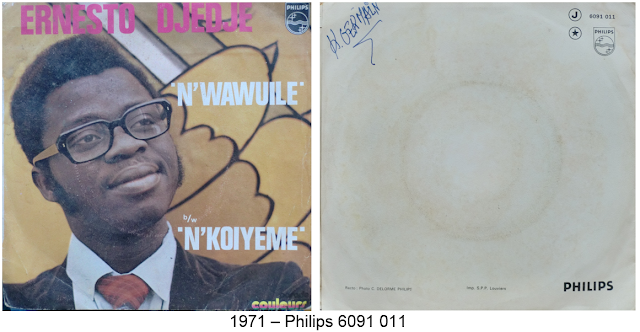 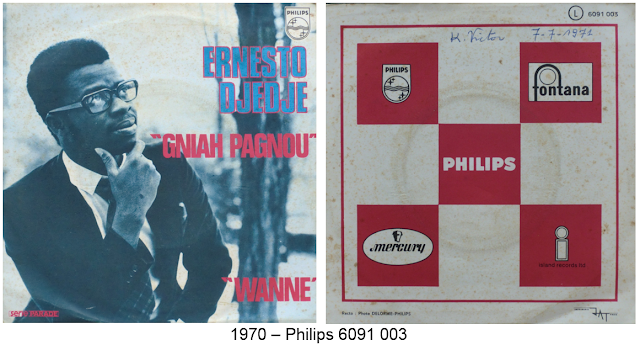 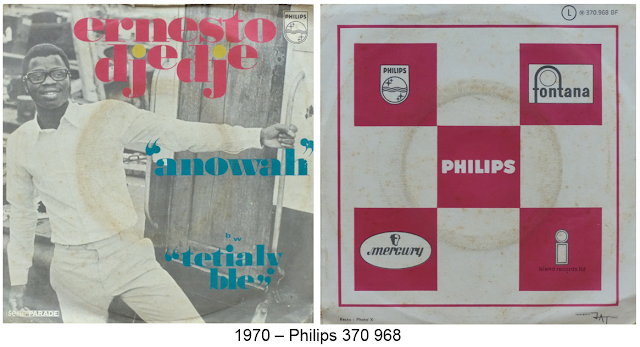