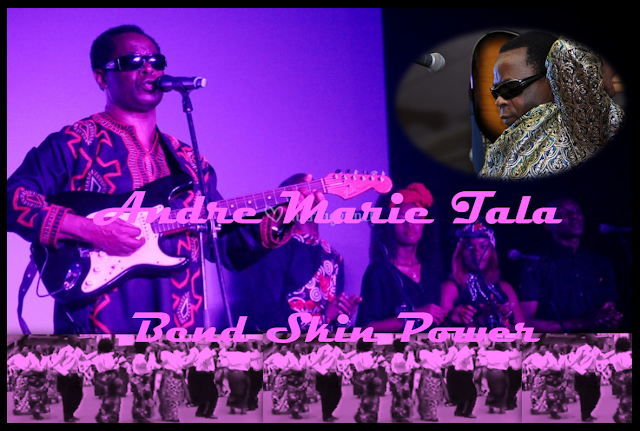 Born on October 29, 1950 in Bandjoun - Western Cameroon, André Marie Tala lost his mother at the age of four. He is raised by his grandmother, a traditional singing master in Bandjoun. His uncle plays accordion. In the early 1960s, the young Tala joined a Christian school choir led by Canadians. He plays tom-tom. In 1965 his world collapses abruptly. His father dies and André Marie Tala himself  becomes blind. The teen makes his own guitar to take care of himself. Despite his disability, he works constantly. Touched by this determination, his uncle Paul Wafo offers him a real guitar. More respite! The youngster plays a total of 18 hours of guitar a day: "I did not sleep very much and I kept going for three years", he remembers.
At the age of 17 Tala founded his first band. The Rock Boys, with which he played his first compositions  that quickly became a regional success: Although heavily influenced at this time by omnipresent French and American pop / rock sounds, the young artist wrote from the beginning his own texts. These lyrics - with an often deep moral or philosophical message - will become an important hallmark of Tala's music.
The group quickly gained some success and began a tour of the Bamileke country and the rest of Cameroon. André Marie Tala is becoming more and more confident and decided to change the name of the group in Les Tigres Noirs ( The Black Tigers). At the same time a talented and promising young guitarist named Sam Fan Thomas joined the band. The latter will later make a successful international solo career with his Makassi rhythm and reached the top of the African charts in the 80s and 90s with a string of danceable hits such as: African Typic Collection, Noa and Mandela. 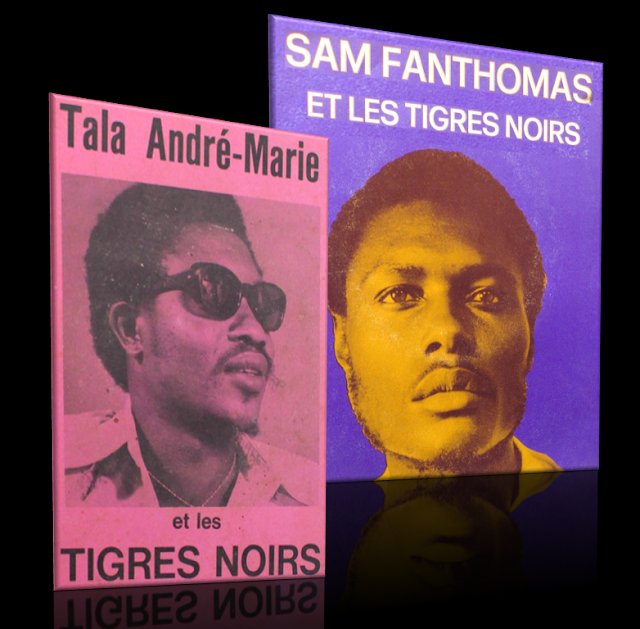 In October 1972, André Marie Tala flew for the first time to France, where he signed a contract with Decca. On this occasion he starts his first collaboration with Manu Diabango. This meeting marks a turning point in his career. Three 45-rpm singles come from it, including six Tala compositions, arranged by Manu Dibango: Sikati, Forgive Me, Potaksina, Café , Na Mala Ebolo and Bwop.These titles become a great (inter)national success, In particular Na Mala Ebolo becomes a real master stroke with more than 120.000 copies sold in 1973.

♫ Audio 1974: Andre Marie Tala – Na Mala Ebolo
♫ Audio 1973: Andre Marie Tala – Potaksina
1n 1974 Tala composed the soundtrack of the film Pousse-Pousse by cameroonian director Daniel Kamwa and in 1975 he established his fame with the album Hot Koki. This international success will tempt James Brown to plagiarize Hot Koki under the title The Hustle. In 1978, after four years of bitter legal battles, Tala wins the case and James brown is sentenced to pay him back all his rights. 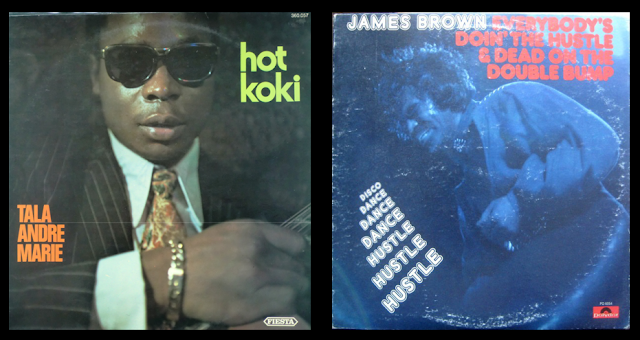 ♫ Audio 1975: Andre Marie Tala – Hot Koki
♫ Audio 1975: James Brown – The Hustle
Since his debut he is compared with Stevie Wonder because of their common disability, blindness. But also because both man are excellent musicians and composers, with a strong moral personality who both belong to the top of the black musical culture. At this moment Tala's careers spans almost half a century and his discography counts more than 25 albums.In the early 90s, Tala found again a fertile source of inspiration in traditional Bamileke rhythms. He started to modernize the musical genre Bend Skin, a Bamileke dance until then mainly practised in a tradional cultural surrounding. The research conducted by Tala on the Bend Skin rhythm, is crowned in 1993 by the release of the eponymous album, becomes a huge success in Cameroon and inspires lots of other musicians to further development of a modern Bend Skin style.

♫ Clip 1993: Andre Marie Tala – Piego Hela
♫ Clip 1993: Andre Marie Tala – Bend Skin
In 2012, he began the project of opening a music school in Douala, Cameroon. This ambitious project is one of the dreams of the singer, which he is still actively working to achieve. In 2013 Tala starts the celebration of his 45-year enduring career with a concert in Douala Bercy. On May 17 2015 he gave a memorable show at the Olympia theatre in Paris together with his lifetime musical friend Sam Fan Thomas. In September 2016 he was on tour in the US and Canada. 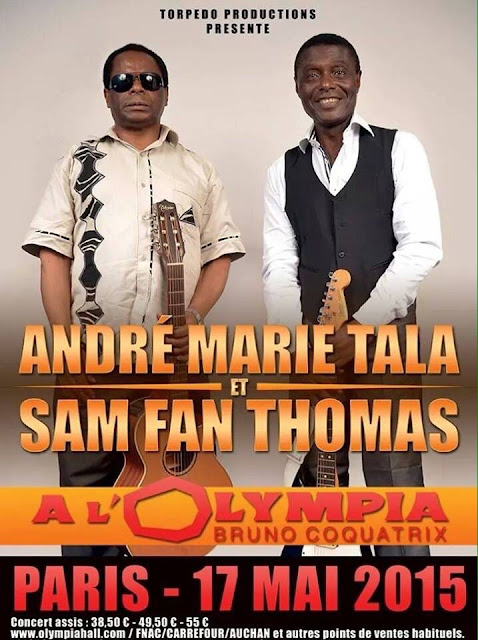 In 2015 the Parisian / London based new record label Africa Seven, paid tribute to 'Funkateer' André Marie Tala with the release of the album African Funk Experimentals 1975 - 1978. This compilation is not a "best of" Tala, that has already been done in 2009 by the label RetroAfric with the CD Bend Skin Beats. For their compilation Africa Seven mainly made use of the albums Tala made for Fiesta Records from 1973 - 1978. 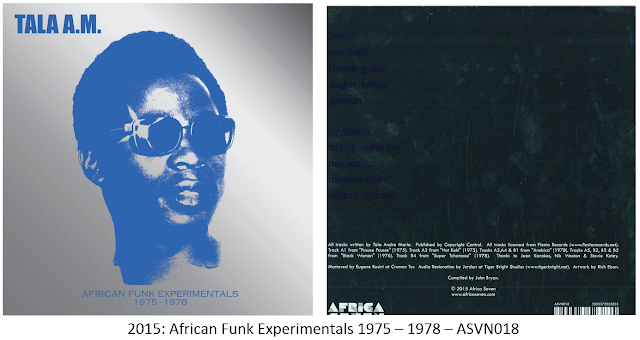 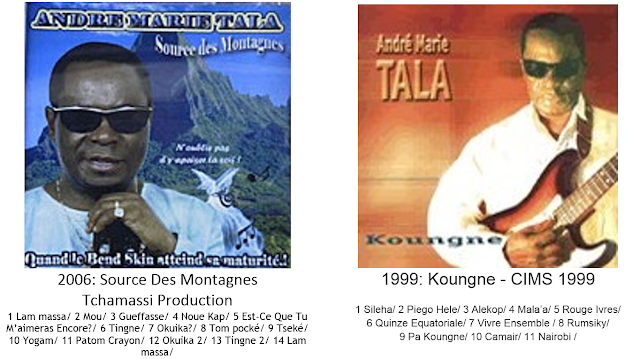 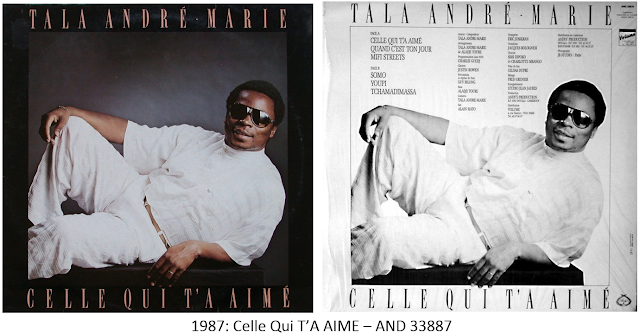 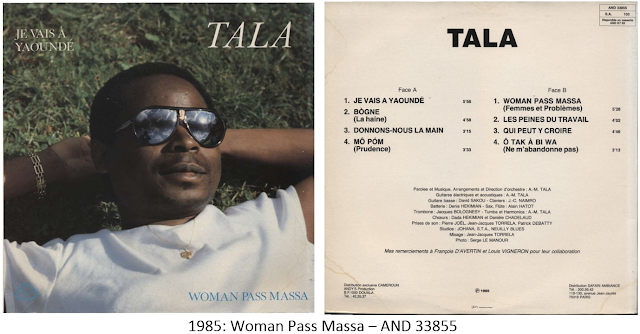 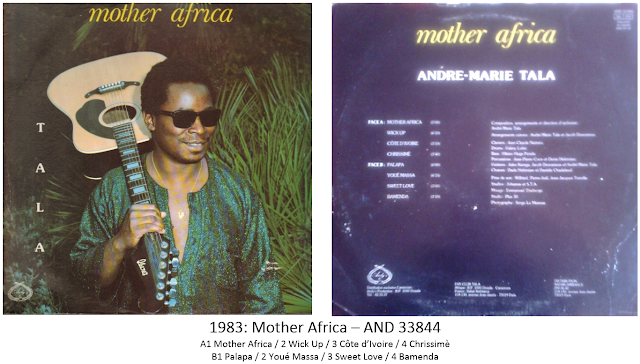 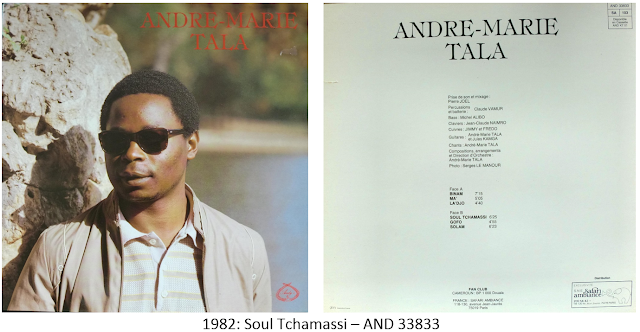 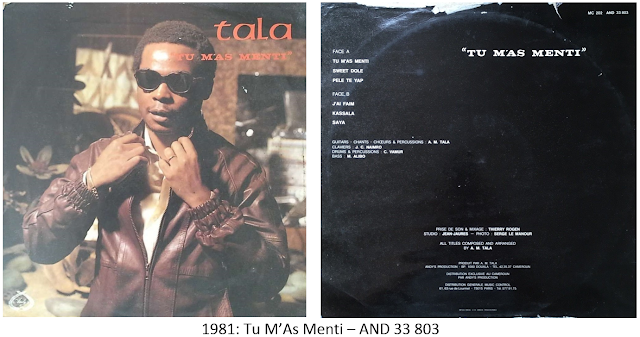 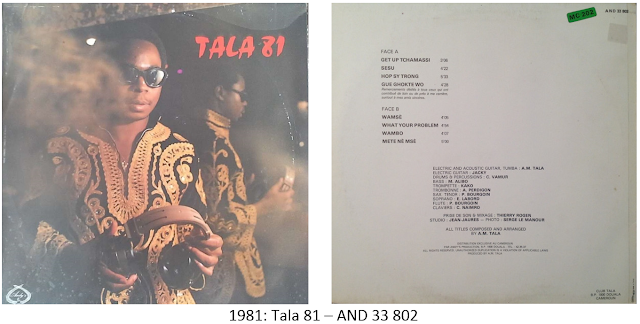 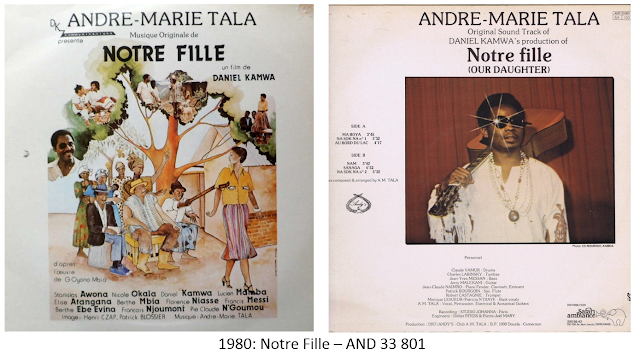 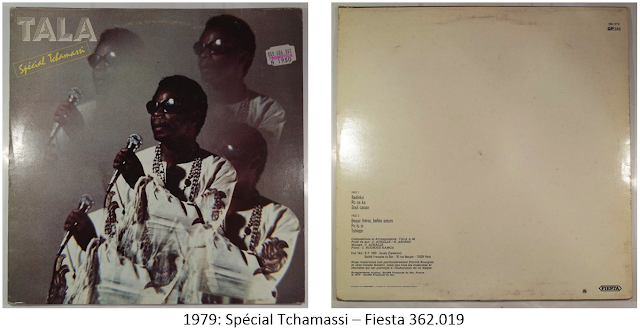 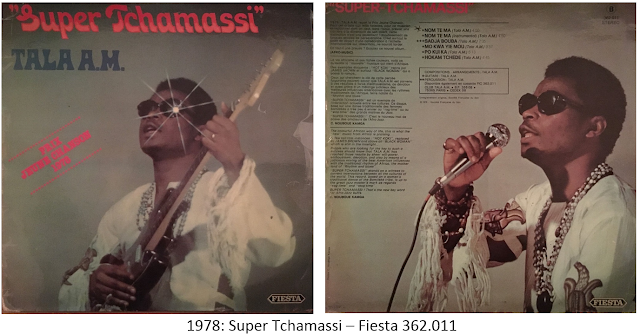 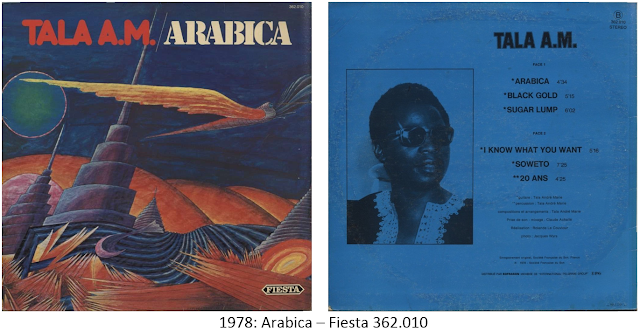 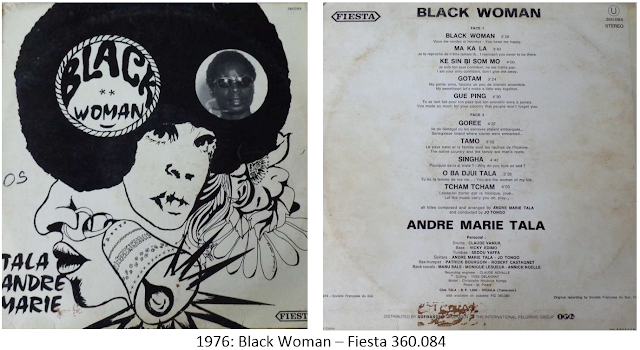 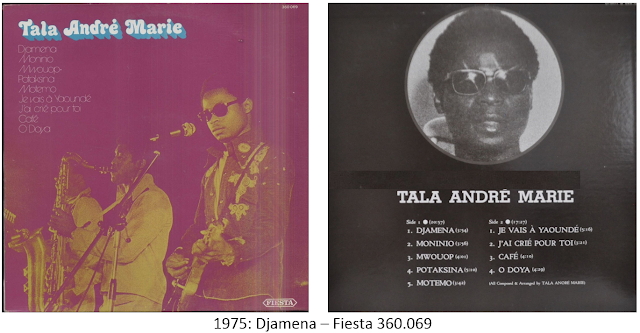 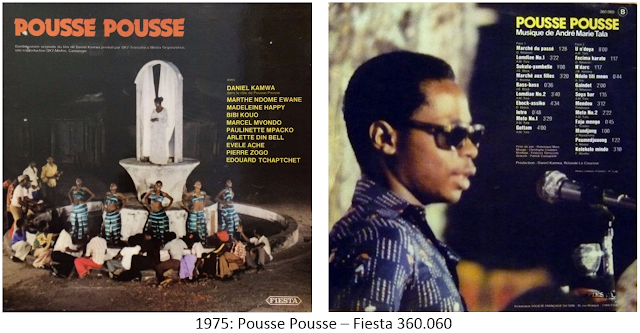 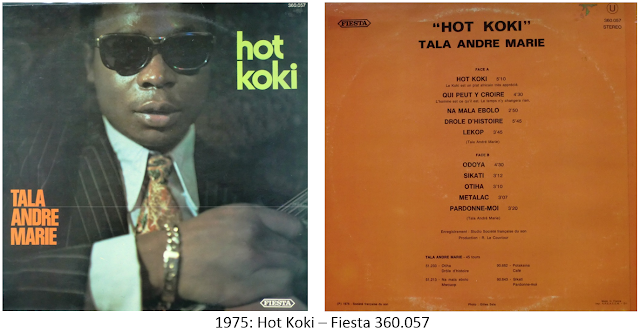 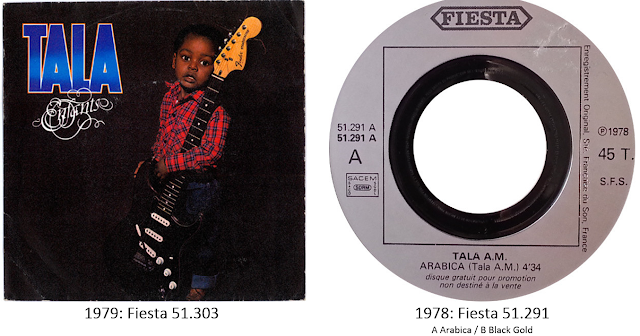 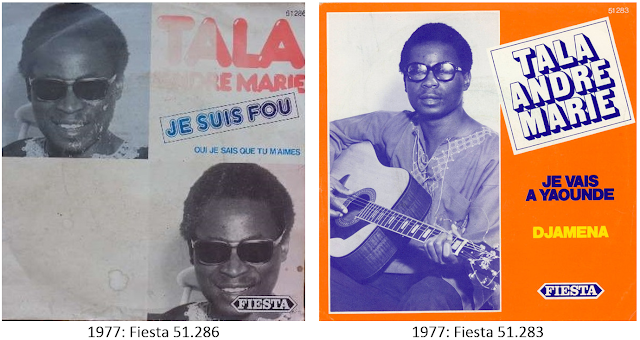 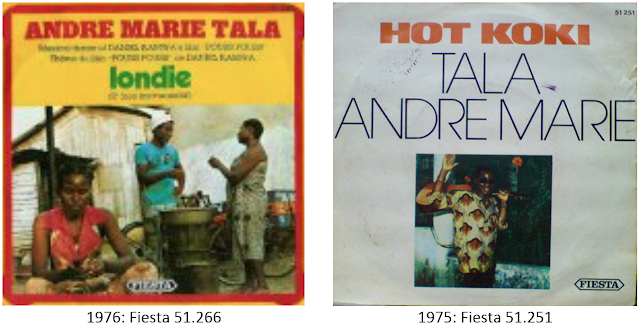 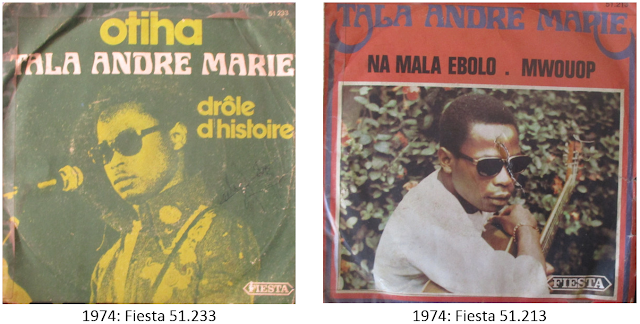 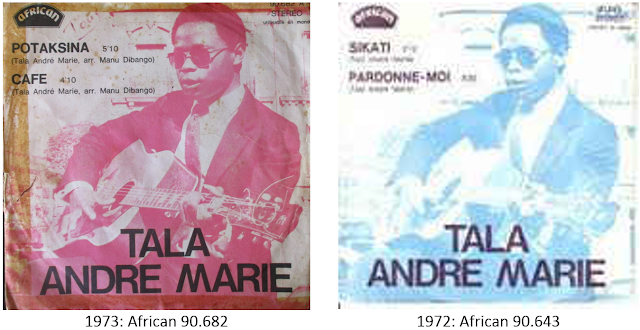 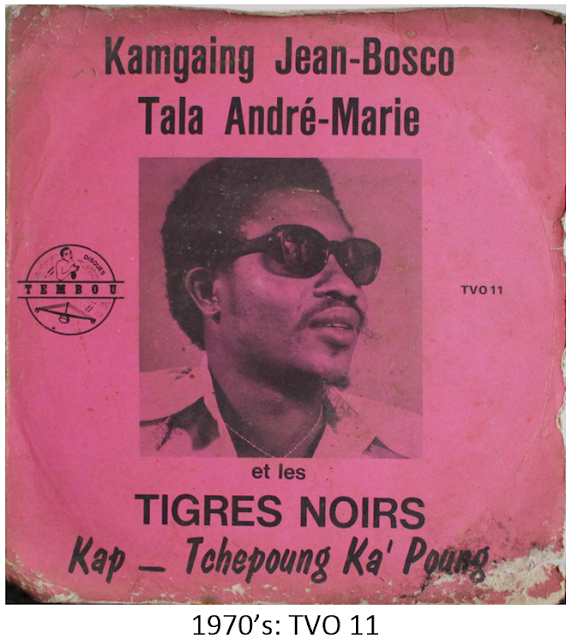